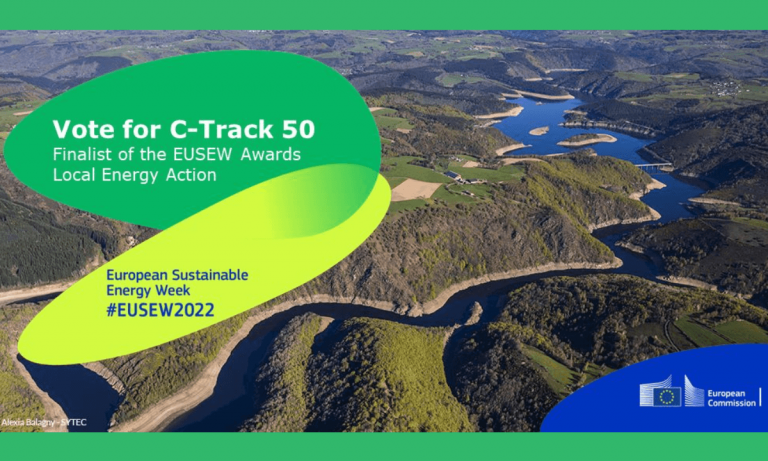 The C-Track 50 project entered the finals of the prestigious EUSEW Awards competition in the Local Energy Action category. It is a competition designed to recognize outstanding individuals and projects for their innovations and efforts in energy efficiency and renewable energy sources.

REA North was a partner in the C-Track 50 project, which supports local authorities in 11 European countries in long-term climate and energy planning with a focus on mitigating and adapting to climate change, including the issue of energy poverty, with the ultimate goal of achieving carbon neutrality by 2050.

If you want to support this project, you can do so via this link. Voting is open until September 18.

The main goal of the project

The project’s primary goal is to help cities and municipalities develop and implement long-term energy and climate plans to reach previously set goals.

In Croatia, the project supported the development of 10 SECAPs (Energy and Climate Sustainable Development Action Plans) for the City of Djakovo, City of Kastav, City of Koprivnica, City of Krizevci, City of Ludbreg, Municipality of Matulji, City of Slatina, City of Varazdin, City of Virovitica and City of Vodnjan.

In addition to supporting the development of SECAP, through a series of activities, the project increased the skills, abilities, and competencies in the energy field of more than 1,200 stakeholders from 235 local and regional governments across Europe.

Thanks to this, these individuals are better prepared to lead their local and regional communities towards climate neutrality by 2050.

The C-Track 50 project, funded by the Horizon 2020 Research and Innovation Programme, was launched in March 2018 and completed in August 2021.

Its goal is to achieve resilience to climate change and reach carbon neutrality by 2050 by:

As part of the project, 118 long-term local and regional energy and climate plans were created at the European level. In addition, the project developed 89 financing proposals covering 117 municipalities, with a total investment of over 450 million euros.

About the EUSEW competition

An expert jury chose the finalists of this year’s most successful projects and actions for clean, safe, and efficient energy.

The winners will be selected by online public voting in four award categories: Innovation, Local Energy Action, Woman in Energy, and Young Energy Trailblazer, and announced on September 26 in Brussels.

This competition aims to meet stakeholders who promote energy efficiency and renewable energy sources, learn about successful policies, and encourage innovation toward meeting the EU’s energy and climate goals.